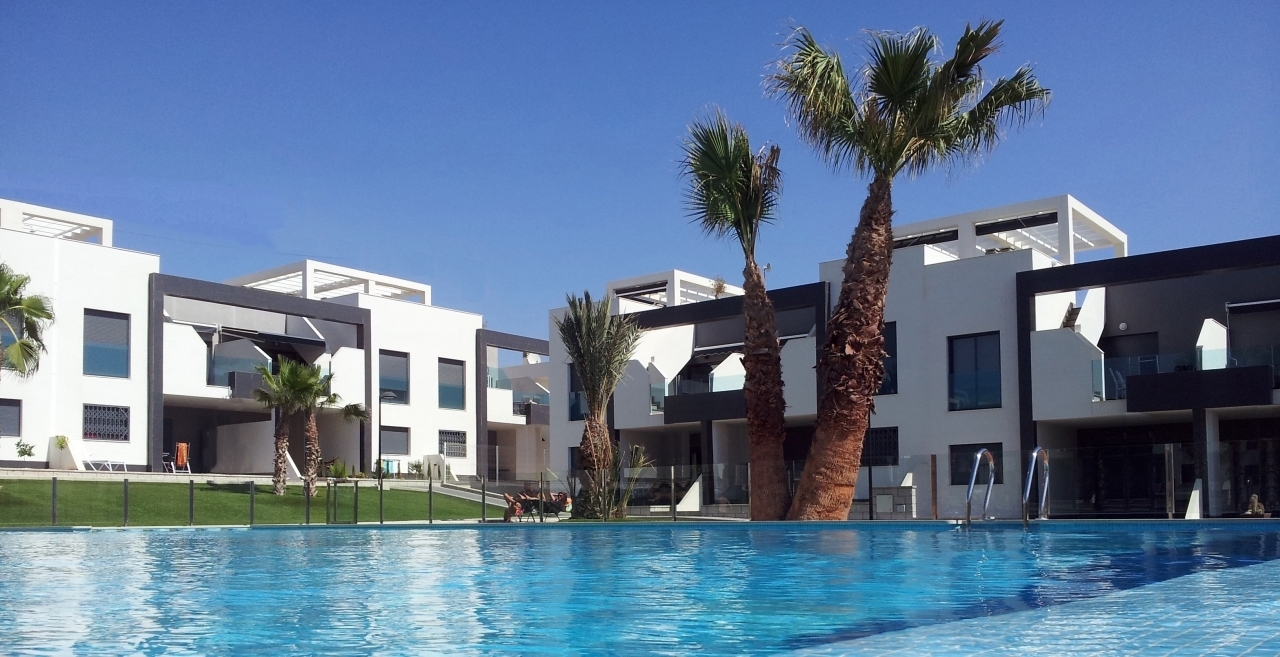 The Apartment is located in a residential area with a total of 112 homes. There are two apartment models in 2 or 3 heights. The Top Floor with Solarium and the Ground Floor with Garden. The apartments are of 2 or 3 bedrooms and 2 bathrooms with parking included. The buildings of three heights have a middle floor with large terraces. The Communal area is in the centre of the buildings, consisting of green areas, communal pool and access to the Spa and Gym.

Costa Blanca literally means “White Coast” and refers to over 200 kilometers of Mediterranean coastline of Alicante, Spain. The Costa Blanca has established tourism industry and is a popular destination for the international community. The region extends from the town of Denia in the north to Pilar De La Horadada in the south and includes other major destinations such as Benidorm, Alicante, Denia, La Zenia, and Javier.

Flights to the Costa Blanca are relatively easy from international airports. The three main Spanish airports for the Costa Blanca are located in Valencia in the north and Alicante and Murcia airports in the south. The region can also be accessed easily via the European high speed railway network links and the coastal motorway network help cater for easy driving access.

The Costa Blanca enjoys a warm Mediterranean climate with long hours of sunshine and relatively low rainfall. August is the hottest month with an average temperature of 29 ° C; the coldest is January at 11 ° C with a daily maximum of 12 hours sunshine in July. The best month to swim in the sea is August when the average is temperature is 25 ° C.

This area of ​​Spain has some spectacular attractions with pleasant resorts and immaculate white sandy beaches dipping into the crystal clear Mediterranean Sea.

There are dozens of superb golf courses and resorts to choose from with everything needed for locating a fantastic golf residence or simply enjoying a holiday.

The Costa Blanca is further blessed with stunning nature and hidden coves and grand mountain ranges provide vivid scenery to this stunning area. There are ancient villages scattered along the coast with plenty of authentic Spanish life to be explored, bustling with traditional Spanish cultural events.

The continued popularity of the Costa Blanca as a year round residence or simply as a holiday destination is not hard to comprehend.

This is a modern fully furnished top floor apartment situated…

The Ciconia I is a detached Villa first line on…

Owning a home is a keystone of wealth… both financial affluence and emotional security.